I’ve been reading many of articles lately about women in science and women in technology, and how society continues to encourage girls to go into the humanities, rather than the sciences, and I must confess that I’m baffled, because my experience was the exact opposite. 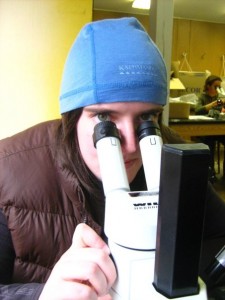 Counting zooplankton during a Limnology field study. Some hours later someone pointed out that my beanie looked like men’s underwear. It was a good weekend. Photo courtesy of Elizabeth Moleski.

While I will admit that I was in an “enriched” program at the public high school I attended, and can only speak to the experience of myself and my fellow “enriched” students, the emphasis throughout my education was on math and science. Ken Robinson has written and spoken about how schools kill creativity, and I think that that was definitely the case for us. When I attended CEGEP, Quebec’s fantastic but bizarre college program, I went into the ‘sciences’ because I liked science, but mostly because it had been emphasized to me over and over (and over and over and over) that going into the sciences would leave the most doors open to me: a science CEGEP degree feeds into every Unviersity undergraduate degree (BSc, BA, BEng, etc.); a social science or liberal arts CEGEP diploma feeds only into Arts or Fine Arts degrees.

On top of maximizing future opportunity, going into the sciences was far more prestigious than going into anything else, regardless of how hard it was to get into the Honours Liberal Arts program, for instance. When I was in school — and I recognize that a lot of this probably had to do with the program I was in — the emphasis for everyone who was “smart” (as measured by their presence in the enriched classes) was to go into scientific fields. We were taught by the best teachers at our high school (those who could teach advanced math, chemistry, and physics), and were surrounded by intelligent, studious, competitive peers. Going into a non-science was perceived as resorting to a fallback plan: not that your interests didn’t align with the subject matter, but that your grades had been insufficient. We were all pushed to become scientists, regardless of gender, to become people who would make important discoveries, solve mysterious proofs, cure cancer, revolutionize neurosurgery, whatever.

I’m sure my experience isn’t reflective of everyone who went to my high school, let alone of twenty-something women in general. Things turned out well for me, but the “cult of science” was strong among my peers and (especially) their parents. Today, many of the forty-odd students in my cohort are working in scientific fields, while a bunch more have realized their interests lie elsewhere. The gender distribution is pretty even, which is pleasing, though the subjects the women have gone into have tended more into biology / biochemistry / medicine, than physics or engineering.

Getting women into the TEM of STEM fields is clearly still a challenge, and one that we can combat by providing young people with opportunities to become interested in those subject areas. The stuff that Girls Learning Code are doing in Toronto, or that Raspberry Pi is hoping to facilitate, are great steps towards getting young women into technology and engineering. I hope that my experience is less weird than the media may lead us to believe… and I hope that the education system becomes more about helping young people find what they love, and supporting them to do that, whatever it is, and less about imposing values.